Gender Discrimination In The Workplace

Protect Your Rights with a Sex andGender Discrimination Lawyer

Have you experienced gender discrimination at work? Mistreating a job applicant or employee because of their gender violates the law.

Know Your Rights: What is Gender Discrimination?

Gender discrimination means treating an employee poorly because of their sex or gender. This can include not hiring a candidate because of her gender, paying employees less based on gender, or firing candidates because of their gender identity.

It is illegal for an employer to make employment decisions based on your gender.

Employers cannot make employment decisions based on your gender instead of your skills or how well you do your job. This includes decisions about hiring, firing, discipline, distribution of benefits, promotion, compensation, job training, or any other condition of employment.

Men can be the victims of gender discrimination.

Examples of Gender Discrimination in the Workplace

Making employment decisions – including hiring and firing – based on gender or gender stereotypes violates the law.

Laws against gender and sex discrimination also protect employees from not receiving promotions, including tenure, because of gender or gender stereotypes.

Gender-Based Differences in Pay are Illegal

Two people with different job titles may have substantially equal jobs based on the tasks they perform.

The law protects you against gender-based differences in any form of compensation, including salary, overtime pay, bonuses, stock options, profit sharing, life insurance, and vacation or holiday pay.

Paying some employees less may qualify as wage discrimination. A gender discrimination attorney can help determine whether you have a case.

Employers cannot treat you unfavorably because of stereotypes associated with gender.

The law prohibits employment decisions based on stereotypes and assumptions about the abilities and traits of different genders.

Examples of gender stereotypes and discrimination:

Employers cannot excuse discriminatory decisions because of the anticipated reactions of other employees or customers.

It is illegal for employers to blame gender discrimination on business concerns. This includes the anticipated response of coworkers and the negative reaction of clients or customers.

Job policies that appear neutral can be discriminatory if they disproportionately harm workers of one particular gender in cases where the policy is not job-related.

For example, an apparently neutral policy that requires all fire department applicants to be at least 5’8” disproportionately excludes women, and may be discriminatory unless the fire department can show that the height requirement is rationally related to job performance.

Gender discrimination can occur when the victim and the perpetrator are of the same gender.

Contact a sex and gender discrimination lawyer to learn whether you have a case.

You can be the victim of gender or sex discrimination even when no employment decision is involved if gender-based harassment has created a hostile work environment.

A hostile work environment can be created by jokes, slurs, or offensive or derogatory remarks about a particular gender.

If your boss is mean to everyone, or if he or she is harsh with you because he or she dislikes you for personal reasons, civil rights laws do not apply. There is no legal requirement that workers be treated with civility, kindness, or even respect.

New York City has a generous standard for a hostile work environment, which is defined as being treated less well than others because of your gender as long as the poor treatment amounts to more than a “petty slight” or “trivial inconvenience.”

New York State recently changed its standard so that after October 11, 2019, discriminatory harassment is unlawful when it “subjects an individual to inferior terms, conditions or privileges of employment.”

Federal law has the strictest standard, which requires that the conduct be either severe or pervasive.

Anyone can be the victim of a hostile workplace. You can be a victim even if you are not the person being targeted by offensive behavior. Men can also be the victims of hostile comments about women.

Your boss isn’t the only one who can create a hostile workplace. Employers have a responsibility to prevent gender discrimination, including stopping their employees from making hostile comments.

A co-worker, a supervisor in another area of the company, or even a non-employee, like a vendor, can be the perpetrator.

How to Prove Discrimination in the Workplace

Gender and sex discrimination can happen in any workplace. If you experience gender discrimination or a hostile work environment, there are several steps you can take right away to help prove your case.

Make it clear that the behavior is unwelcome and keep records to prove that you did.

If you complain about gender discrimination, it is illegal for your employer to take any action against you.

It is illegal for employers to retaliate against applicants or employees who complain about discrimination on the job, file a charge with the Equal Employment Opportunity Commission (EEOC) or any state or city agency, or participate – including being a witness – in an employment discrimination proceeding, such as an investigation or lawsuit.

As long as you had a good faith and reasonable belief that discrimination or harassment occurred, your employer is barred from taking any action against you for speaking out or participating in any investigation or proceeding. It does not matter if an agency or court later determines that there was no discrimination.

How To File A Claim

If your claim falls under multiple gender discrimination laws, as it usually will, the three agencies that handle discrimination claims have what is called a “work-sharing agreement,” which means they cooperate with each other to process your claims. There is no need to file a claim with each agency. You simply need to indicate that you want your claim “cross-filed” with the other agencies. 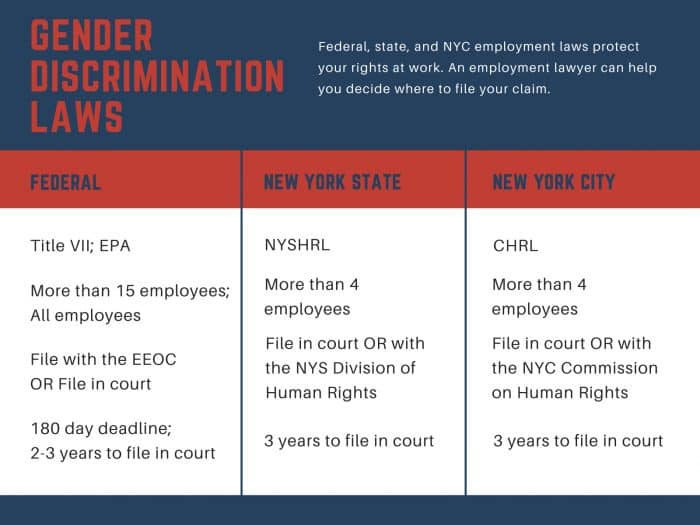 What is a Hostile Work Environment?