Proving Age Discrimination in the Workplace

Protect Your Rights with a New York Age Discrimination Lawyer

Have you experienced age discrimination at work? Mistreating a job applicant or employee because of their age violates the law. While federal laws only apply to workers over the age of 40, New York state and city laws protect all workers from age-based discrimination.

Know Your Rights: What is Age Discrimination?

It is illegal for an employer to make employment decisions based on your age.

Employers cannot make employment decisions based on your age instead of your skills or how well you do your job. This includes decisions about hiring, firing, discipline, distribution of benefits, promotion, compensation, job training, or any other condition of employment.

Young people can also be the victims of age discrimination.

While the federal ADEA only applies to workers over the age of 40, New York state and city laws apply to workers of all ages. Age discrimination can occur even if the perpetrator is over 40 or the same age as the victim.

If you have been the victim of illegal age discrimination, you have protections under federal, state, and New York City laws.

The law does not just protect “employees.” After October 11, 2019, New York State’s discrimination laws expanded to cover non-employees, such as domestic workers, independent contractors, consultants, vendors, subcontractors, and persons providing services pursuant to a contract, where employers knew or should have known the discrimination was happening.

Age Discrimination in the Workplace Examples

Age discrimination in the workplace examples:

Laws against age discrimination also protect employees from not receiving promotions, including tenure.

Age discrimination in the workplace examples:

Job policies that appear neutral can be discriminatory. For this reason, policies cannot disproportionately harm workers based on age, unless the policy is job-related.

For example, a company cannot require that all prospective employees undergo a physical fitness test before being hired if being physically fit has nothing to do with the company’s business. The requirement must relate to carrying out the job.

However, employers can require a minimum level of experience for any position, as long as it is not tied to a specific age.

Age discrimination can occur regardless of the age of the victim or the perpetrator.

You can be the victim of age discrimination even outside of employment decisions. Age-based harassment can also create a hostile work environment.

Jokes, slurs, or offensive or derogatory remarks about people of a certain age can create a hostile work environment. Under state and city law, anyone over the age of 18 can be subject to age-based harassment. Federal law only applies to workers over the age of 40.

New York City has a generous standard for a hostile work environment, which is defined as being treated less well than others because of your age as long as the poor treatment amounts to more than a “petty slight” or “trivial inconvenience.” Federal law requires that the conduct be either severe or pervasive. New York State recently lowered its standard so that after October 11, 2019, it no longer requires that discriminatory harassment be severe or pervasive.

It is a misconception that only your boss can create a hostile work environment. Employers have a responsibility to prevent age discrimination. A co-worker, a supervisor in another area of the company, or even a non-employee, like a vendor, can be the perpetrator.

How To Prove Age Discrimination In The Workplace

If you complain about age discrimination in the workplace, it is illegal for your employer to take any action against you.

In addition to protections for different types of age discrimination, the law also protects employees from retaliation.

It is illegal for employers to retaliate against anyone who:

As long as you have a good faith and reasonable belief that discrimination or harassment occurred, your employer is barred from taking any action against you for speaking out or participating in any investigation or proceeding. It does not matter if an agency or court determines that there was no discrimination.

If you speak out about discrimination and harassment in your workplace, the law protects you from retaliation. Age discrimination lawyers can help protect your rights.

How to File a Claim For Age Discrimination

If you choose to file a claim for age discrimination, there are a number of options available. You can file a complaint with the U.S. Equal Employment Opportunity Commission (EEOC), which handles violations of federal law, or the New York State Division of Human Rights, which handles NYSHRL violations, or the New York City Commission on Human Rights, which is responsible for CHRL violations.

If your claim falls under multiple laws, the three agencies that handle discrimination claims have what is called a “work-sharing agreement.” This means they cooperate with each other to process your claims. There is no need to file a claim with each agency. You just need to indicate that you want your claim “cross-filed” with the other agencies. 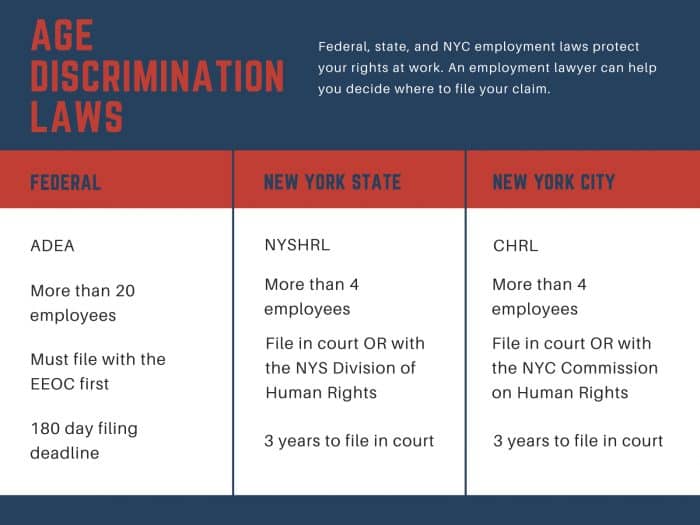 In addition to these damages, victims of age discrimination can also receive emotional distress damages.

What is a Hostile Work Environment?