Pregnancy Discrimination in the Workplace

Protect Your Rights with a Pregnancy Discrimination Lawyer

Have you experienced pregnancy discrimination at work? Mistreating a job applicant or employee because of pregnancy, childbirth, or a related medical condition violates the law.

Know Your Rights: What is Pregnancy Discrimination?

Pregnancy discrimination in the workplace means treating a job applicant or an employee unfavorably because of pregnancy, childbirth, or a related medical condition. It can also include retaliation for taking paid family leave.

It is illegal for an employer to make employment decisions based on pregnancy.

Employers cannot make employment decisions based on your pregnancy, childbirth, or a related medical condition instead of your skills or how well you do your job.

The law does not just protect “employees.” After October 11, 2019, New York State’s discrimination laws expanded to cover non-employees, such as domestic workers, independent contractors, consultants, vendors, subcontractors, and persons providing services pursuant to a contract, where employers knew or should have known the discrimination was happening.

Examples of Pregnancy Discrimination in the Workplace

Employment Decisions Based on Pregnancy are Illegal

It is a violation of the law to make employment decisions – including hiring and firing – based on a current or past pregnancy or pregnancy-related conditions.

Laws against pregnancy discrimination in the workplace also protect employees from not receiving promotions, including tenure, because of pregnancy or a related medical condition.

In New York City, if you are not able to perform certain duties of your job during or after your pregnancy, your employer must provide reasonable accommodations that allow you to do your job.

For example, your employer can change the type of tasks you do, offer bathroom breaks, give permission to have snacks or water at your workstation, or allow you periodic rest breaks if you have to stand for long periods of time.

Some pregnancy and post-pregnancy conditions may qualify as disabilities under the ADA if they substantially limit a major life activity or the normal functioning of a bodily system. For example, anemia, sciatica, gestational diabetes, preeclampsia, morning sickness, swelling in the legs, and depression could qualify as ADA disabilities.

Also, if you are temporarily disabled by a pregnancy, you may be entitled to temporary benefits under the New York state disability insurance.

You are entitled to receive 50% of your salary up to a weekly cap. You may not collect unemployment insurance during your leave.

You are required to give your employer 30 days notice before taking the leave. If that is not possible, your notice must be as soon as “practicable.” The notice should explain what type of leave is necessary and when and how long you anticipate being out on leave. Your employer should provide you with an application, which will be submitted to your employer’s paid family leave insurance carrier. Your employer may request additional documentation, such as proof of the birth.

Your employer cannot discriminate or retaliate against you for taking leave under the NYSPFL. You are entitled to job protection, meaning you cannot be fired and you must be reinstated to the same or an equivalent position.

If your employer wrongfully refuses your request for leave or terminates you because you sought leave, an administrative law judge with the Workers’ Compensation Board could order your employer to reinstate you, pay any lost wages, pay pregnancy discrimination attorney’s fees, and pay up to $500 in penalties.

You are entitled to benefits under the NYSPFL regardless of your immigration status and regardless of the number of workers your employer employs. You are covered by this law even if you are a domestic worker who is the only person working for your employer.

If you are covered by the Family and Medical Leave Act, you may be entitled to take up to 12 weeks of unpaid leave for the birth of your newborn. Your job is protected during this leave period.

You are allowed to take leave under both the FMLA and the NYSPFL, but your employer can require you to take time off for the same event concurrently. However, your employer must notify you of this requirement before your leave starts.

Once you have had your baby and returned to work, your employer is required by New York law to give you paid breaks for the purpose of breastfeeding or pumping breast milk for up to three years following childbirth.

Your employer must make reasonable efforts to provide a room or other location, in close proximity to the work area, where you can express milk in privacy.

No employer may discriminate in any way against an employee who chooses to express breast milk in the workplace.

Employers Cannot Treat You Unfavorably Because Of Stereotypes Associated With Pregnancy.

The law prohibits employment decisions based on stereotypes and assumptions about the abilities of pregnant women, including their commitment to their job.

Employers cannot excuse discriminatory decisions because of the anticipated reactions of other employees or customers.

Employers cannot make discriminatory employment decisions with the excuse that the decision was driven by business concerns such as the effect on employee relations or the negative reaction of clients or customers.

Unintentional pregnancy discrimination in the workplace can also be illegal.

Job policies that appear neutral can be discriminatory if they disproportionately harm workers who are protected by pregnancy discrimination laws, as long as the policy is not job-related.

This is known as disparate impact, and it applies when an employer’s requirement harms women who are pregnant or dealing with pregnancy-related conditions more than other employees.

For example, a job that required employees to lift up to 50 pounds disproportionately excludes pregnant women and may be discriminatory unless the employer can show the weight lifting requirement is rationally related to job performance.

It is against the law to harass a woman because of pregnancy, childbirth, or a related medical condition. Anyone can be the victim of discrimination even when no employment decision is involved if pregnancy-related harassment creates a hostile work environment.

A hostile work environment can be created by jokes, slurs, or offensive or derogatory remarks, as well as offensive images, even if they are not posted in a public area at work.

Under federal law, if comments or acts are not offensive in the extreme, they constitute harassment only if they occur often enough to create an intimidating, hostile, or offensive work environment. However, a single incident such as a physical assault might be so threatening and insulting that it could rise to the level of harassment.

It is a misconception that only the target of hostile comments can be the victim of a hostile work environment. You can be a victim even if you are not the person being targeted by the offensive behavior, and even if you are not pregnant or dealing with pregnancy-related conditions.

It is a misconception that only your boss can create a hostile work environment. Employers have a responsibility to prevent pregnancy discrimination at work.

What To Do If You Are The Victim of Discrimination

Discrimination can happen in any workplace. If you think you are the victim of discrimination, there are several steps you can take right away.

A pregnancy discrimination lawyer can help protect your rights.

If you complain about pregnancy discrimination at work, it is illegal for your employer to take any action against you.

It is illegal for employers to retaliate against applicants or employees who complain about discrimination on the job, file a charge with the Equal Employment Opportunity Commission (EEOC) or any state or city agency, or participate––including being a witness––in an employment discrimination proceeding, such as an investigation or lawsuit.

As long as you had a good faith belief that discrimination or harassment occurred, your employer is barred from taking any action against you for speaking out or participating in any investigation or proceeding. It does not matter if an agency or court determines that there was no discrimination.

How to File a Claim For Pregnancy Discrimination in the Workplace

If your claim falls under multiple laws, the three agencies that handle discrimination claims have what is called a “work-sharing agreement,” which means they cooperate with each other to process your claims. There is no need to file a claim with each agency. You just need to indicate that you want your claim “cross-filed” with the other agencies. 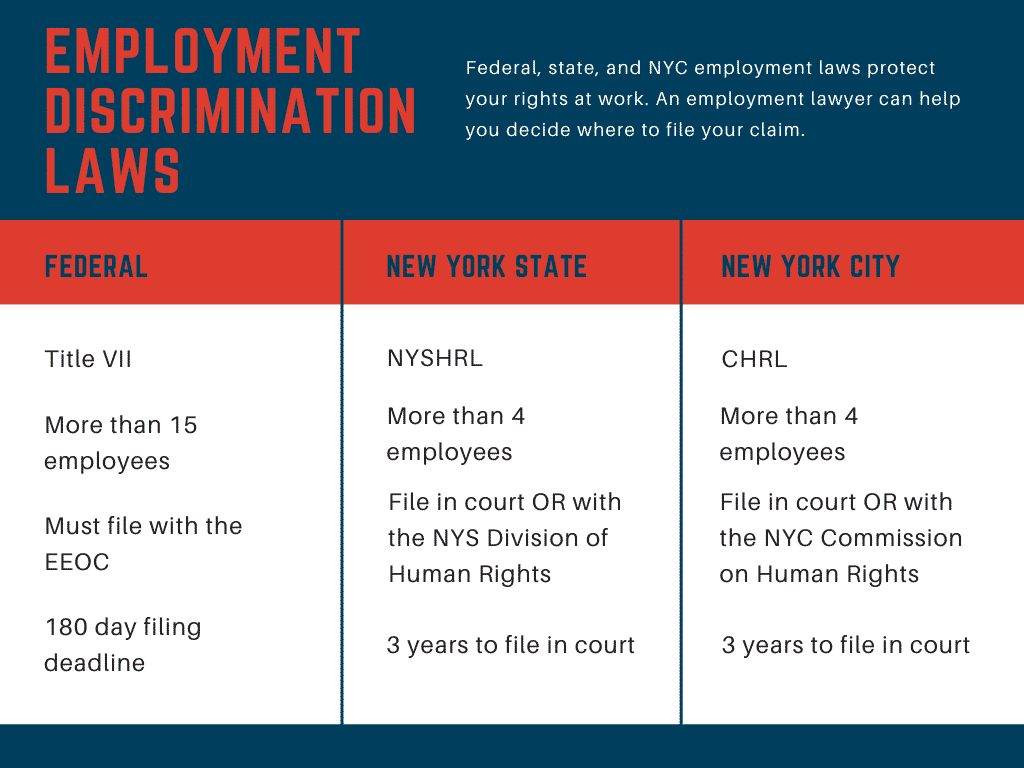 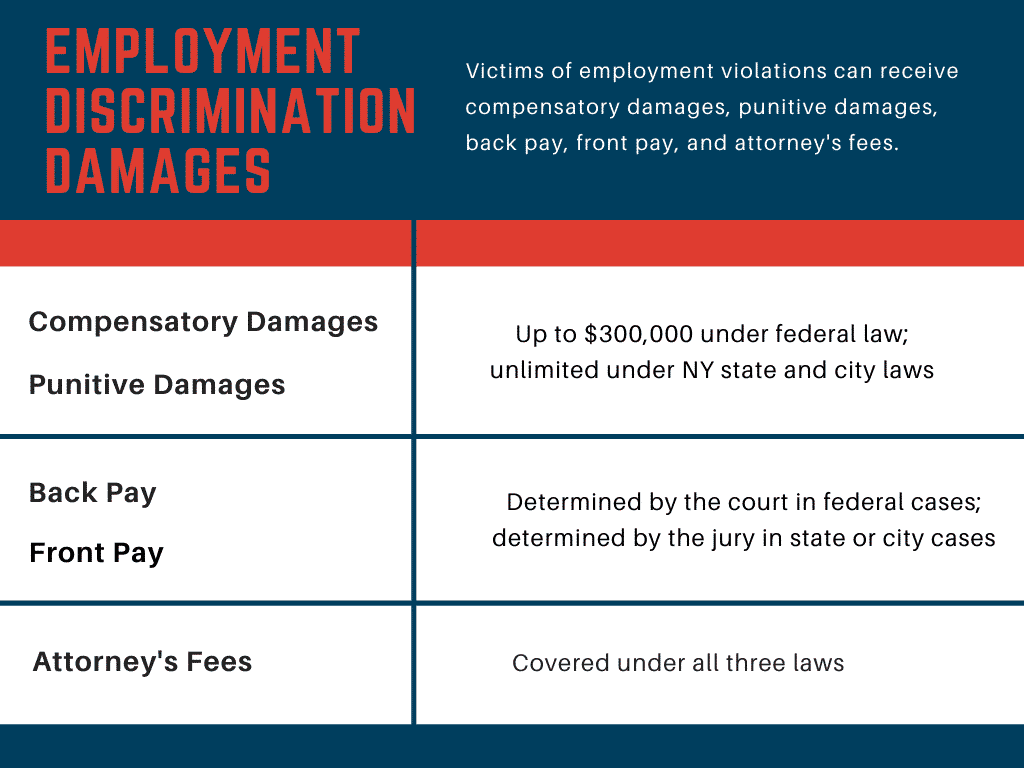 Victims of pregnancy discrimination can also receive emotional distress damages during a lawsuit.