Over half a million nannies work across the U.S. What laws protect their rights?

Nannies in every state have legal rights, including the right to receive overtime pay, at least the minimum wage, and wages for every hour worked.

Nannies also have a right to a workplace free from discrimination and sexual harassment.

How can nannies recover unpaid overtime pay, file a harassment complaint, or fight back against wage discrimination? Keep reading to learn more about workplace rights for nannies. 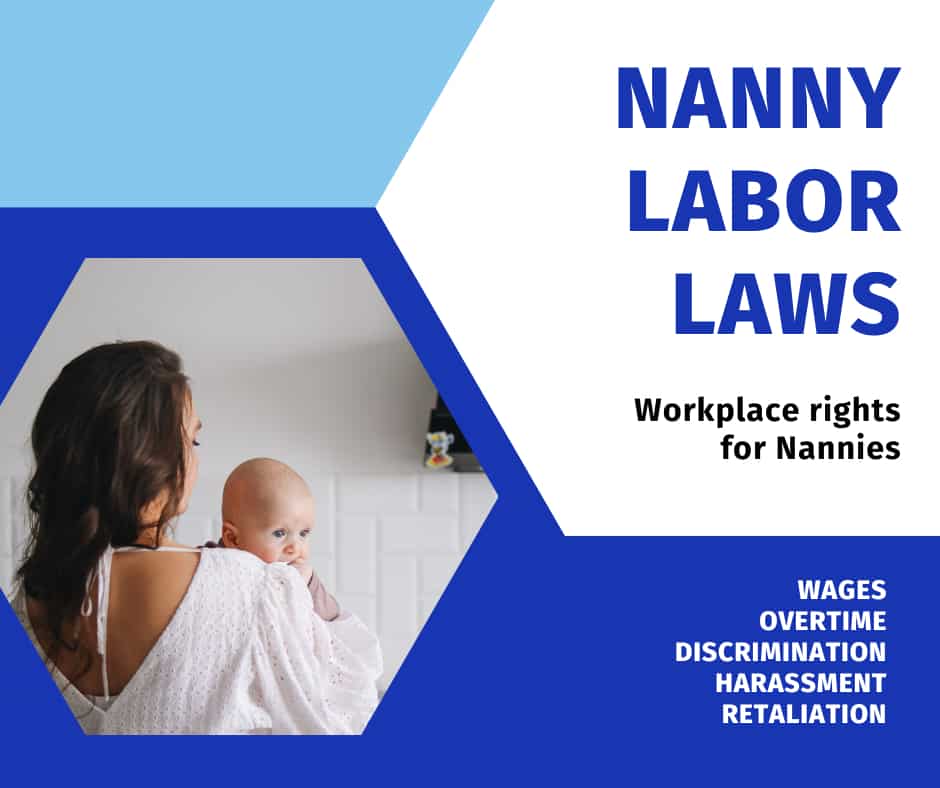 As employees, nannies have workplace rights.

New York offers some of the strongest employment laws for nannies in the country. The Domestic Workers’ Bill of Rights guarantees overtime pay and paid days off. The law also includes discrimination and sexual harassment protections.

These rights apply to all New York nannies regardless of immigration status––including undocumented workers.

In New York, immigration status does not change the legal rights of a nanny or other type of domestic worker. All workers have the right to file a claim for unpaid wages, overtime, or workplace discrimination.

Do nannies qualify for overtime pay? Under federal laws, nannies and other domestic workers must receive overtime pay when they work more than 40 hours in a week.

Employers must calculate overtime pay on a weekly basis. For example, if a nanny works 50 hours one week and 30 hours the next, employers cannot average the hours and refuse to pay overtime.

In New York, nanny overtime laws require time-and-one-half pay for all hours over 40 in a week. For live-in nannies, overtime protections begin at 44 hours per week.

Employers cannot offer extra time off instead of paying overtime wages. Nannies also qualify for overtime pay if they work on their only day off in a seven-day period.

Nannies with unpaid overtime can file a complaint or a lawsuit against their employer. In an unpaid overtime lawsuit, nannies can win back pay, double damages, penalties, and attorneys’ fees.

Legally, employers can only make certain deductions from a nanny’s wages. For example, employers can deduct pay if a nanny who receives hourly pay arrives late.

Employers can also take deductions for income taxes or health insurance. However, these deductions must benefit the nanny and employees must provide written permission.

In New York, nannies earn extra pay if they work more than ten hours a day. Known as spread-of-hours pay, the law requires an extra hour of pay for nannies receiving minimum wage.

When calculating a nanny’s daily hours, the law includes all meal breaks, rest breaks, and time between shifts.

Nannies who make above the minimum wage may not qualify. An employment lawyer can provide more information.

Some nanny jobs require “on-call” time, where nannies must be available to work outside their normal hours. Nannies must receive pay for all hours worked.

But what counts as “hours worked” when it comes to on-call time?

These legal protections cover nannies during the hiring process and on the job. They also protect nannies from wage discrimination.

Discrimination in Hiring and Wages

For example, nanny services cannot ask discriminatory questions on job applications, including whether the applicant has children, her country of origin, or her age.

Some job ads may also include disguised discriminatory language, such as “athletic” or “energetic” that can serve as proxies for youth  Refusing to hire an older person or paying them less, for instance, qualifies as discrimination.

Nanny services and employers cannot pay a nanny less because of age, race, or immigration status.

Nannies who face discrimination in hiring and wages should reach out to an employment lawyer to discuss their options.

Discrimination and Sexual Harassment at Work

Employers cannot discriminate against nannies at work. Discrimination can include harassment based on sex, race, religion, age, or disability status. It can also mean paying a nanny less because of race, age, color, or any other protected category.

The Domestic Workers’ Bill of Rights protects nannies from discrimination and sexual harassment at work.

These protections cover all domestic workers, including nannies, regardless of the number of employees. The law even protects workers who are the only employee in the household.

Thanks to the Domestic Workers’ Bill of Rights, employers cannot fire, refuse to hire, or underpay a nanny because of race, religion, national origin, age, color, or other protected characteristics.

Employers cannot retaliate against nannies who stand up for their legal rights. They also cannot fire nannies for illegal reasons.

These laws also cover undocumented workers. In New York, employers cannot retaliate against undocumented workers by threatening to call the police or ICE. They also cannot threaten deportation or force employees to reverify their employment authorization as an act of retaliation.

Victims of retaliation or wrongful termination can file a complaint to receive lost wages and benefits, and emotional distress.

Nanny laws vary depending on the state.

In New York, for example, nannies benefit from the Domestic Workers’ Bill of Rights. This law guarantees overtime pay, bans wage discrimination, and protects nannies from workplace discrimination and harassment.

Care.com provides a helpful guide to nanny laws by state. In the tri-state area, learn more about nanny tax and labor laws:

Nannies have legal rights. If your employer refused to pay overtime or wages, you can file a claim with the U.S. Department of Labor’s Wage and Hour Division.

If you faced discrimination or sexual harassment, you can file a complaint with the Equal Employment Opportunity Commission (EEOC).