What is Wage Theft?

Your questions about workers’ rights, answered 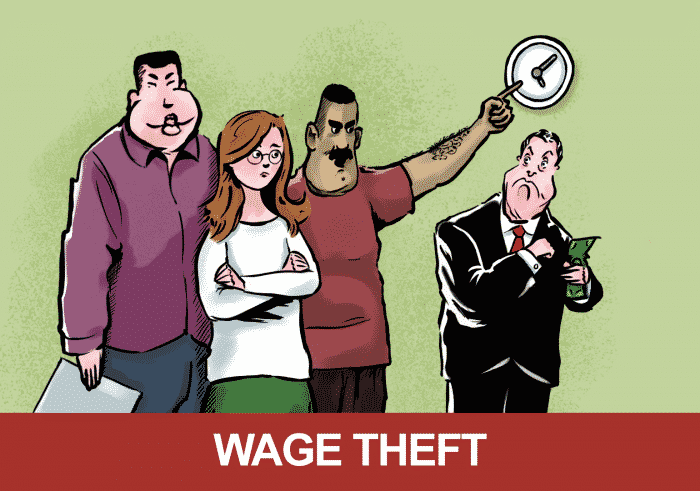 Wage theft costs workers an estimated $50 billion a year. But what is wage theft? How do you report wage theft? And can you receive back pay if your employer doesn’t pay you?

It can also include harder-to-detect examples, like automatically deducting time for meal breaks or not paying for remote work.

Keep reading to learn about the definition of wage theft, wage theft examples, and how to report wage theft.

What is wage theft?

Wage theft happens if an employer doesn’t fully pay an employee for their labor. It takes many forms, such as paying less than the minimum wage, failing to pay overtime, requiring off-the-clock work, or taking illegal deductions.

Wage theft is a major problem in the U.S. and costs employees an estimated $50 billion a year in lost wages. Workers in low-wage industries are most commonly the victims of wage theft.

Federal, state, and local laws protect employees from wage theft. These laws also give employees tools to recover stolen wages from their employers.

Where do I report wage theft?

Victims of wage theft can file a claim with the Wage and Hour Division of the federal Department of Labor.

In addition, you can file with your state department of labor. Some states, such as New York, offer stronger protections than federal law and give employees a longer time to file a claim.

What is the punishment for wage theft?

Employers found guilty of committing wage theft must repay the stolen wages to their employees. Victims of wage theft also qualify for liquidated damages, which equal the amount of unpaid wages.

In New York, the Wage Theft Prevention Act also orders fines of up to $10,000 per employee for companies that fail to provide a wage notice or pay stubs. The Act punishes repeat offenses by ordering penalties of between $1,000 to $20,000 for employers who violated the law in the previous six years.

Can you sue a company for wage theft?

Yes, you can file a lawsuit against a company for wage theft. Depending on your state, a wage theft lawyer may recommend bringing a suit under state laws.

A lawyer can also help you file a complaint with the federal Wage and Hour Division of the Department of Labor and your state’s department of labor.

If you choose to hire a lawyer, both the federal Fair Labor Standards Act and many state labor laws require your employer to pay your attorney fees if you win your claim.

What is a wage theft notice?

In New York, employers must give their employees written notice of wage rates under the Wage Theft Prevention Act. The notice must include the rate of pay, whether the employee receives wages hourly, any deductions, the scheduled payday, and the employer’s contact information.

If employers fail to provide wage notices, they can be fined up to $5,000 per employee.

How do you report wage theft?

Employees can file a claim for wage theft independently with the federal Wage and Hour Division or their state department of labor. A wage theft lawyer can help you navigate the process.

Victims of wage theft can also file a lawsuit. This may be the best available remedy for certain employees. However, depending on your state, the statute of limitations for reporting wage theft varies. Some states also cap back wages for certain professions.

In the New York City area, employment lawyer Charles Joseph brings over 20 years of experience in wage theft. He founded Joseph & Kirschenbaum, a wage theft firm that has recovered over $140 million for clients. Contact Charles Joseph for a free consultation.

Learn more about common forms of wage theft or read our related FAQs.