Racial Discrimination in the Workplace

Have you experienced racial discrimination at work? Mistreating a job applicant or employee because of their race violates the law.

Know Your Rights: What is Racial Discrimination?

Treating job applicants or employees unfavorably because of their race qualifies as race discrimination. This includes creating a hostile work environment through racial harassment.

It is illegal for an employer to make employment decisions based on your race.

Employers cannot make employment decisions based on your race. This includes decisions about hiring, firing, discipline, distribution of benefits, promotion, compensation, job training, or any other condition of employment.

If you believe that you have been the victim of race discrimination, you are protected under federal, state, and New York City racial discrimination laws.

Examples of Racial Discrimination in the Workplace

Failure To Promote Because Of Race Is Illegal

Racial discrimination laws also protect employees from not receiving promotions, including tenure, because of race or race stereotypes.

Race-Based Differences in Pay are Illegal

The law protects you from race-based differences in any form of compensation, including salary, overtime pay, bonuses, stock options, profit sharing, life insurance, and vacation or holiday pay.

Employers cannot treat you unfavorably because of personal characteristics or stereotypes associated with race.

The law prohibits employment decisions based on stereotypes and assumptions about the abilities and traits of individuals from certain racial groups.

Employers cannot treat you unfavorably because of personal characteristics associated with race, including hair texture, skin color, or facial features.

Protected practices or characteristics can also include cultural dress, manner, or speech, as long as the practice or characteristic does not materially interfere with the ability to perform job duties. For example, your employer cannot refuse to promote you solely because you wear your hair in braids or dreadlocks.

Employers cannot excuse racially motivated decisions on the anticipated reactions of other employees or customers.

Employers cannot make racially motivated employment decisions with the excuse that the decision was driven by business concerns such as the effect on employee relations or the negative reaction of clients or customers.

If your employer physically isolates a particular group of employees away from other employees or customers because of race, that conduct could constitute race discrimination.

It is illegal to exclude minorities from certain positions or groups. It also violates the law to categorize employees or jobs so that certain jobs are generally held by minorities.

Unintentional racial discrimination in the workplace can also be illegal.

Job policies that appear neutral can be discriminatory if they disproportionately harm workers of certain races, as long as the policy is not job-related.

However, Section 1981 only prohibits intentional discrimination by your employer, and would not cover these situations.

Color discrimination occurs when a person is discriminated against based on the lightness, darkness, or another color characteristic of their skin. Unlike race, which is a socially defined category, color refers to skin tone. Discriminating against employees because of their skin color violates the law.

The law prohibits color discrimination against all persons, including Caucasians.

You do not have to be a member of a protected race to be the victim of race discrimination.

It is against the law to discriminate against someone because he or she is associated with someone of a different race.

Race or color can never be a bona fide occupational qualification.

You can be the victim of racial discrimination in the workplace even when no employment decision is involved if race-based harassment has created a hostile work environment.

Under federal law, if comments or acts are not offensive in the extreme, they constitute harassment only if they occur often enough to create an intimidating, hostile, or offensive work environment. However, a single incident such as a physical assault, use of “the N-word,” or hanging a noose, might be so threatening and insulting that it could rise to the level of harassment.

It is a misconception that only your boss can create a hostile work environment. Employers have a responsibility to prevent race discrimination.

While employers are generally liable for a supervisor’s behavior, they are also liable for the behavior of employees who are not in a position of authority over the victim if there have been complaints about the perpetrator or the perpetrator has committed acts against others.

If the company knew or should have known about the discrimination, they may be liable.

How to Prove Racial Discrimination in the Workplace

Discrimination can happen in any workplace. If you think you are the victim of racial discrimination or a hostile work environment, there are several steps you can take right away.

If you complain about race discrimination, it is illegal for your employer to take any action against you.

It is illegal for employers to retaliate against applicants or employees who complain about discrimination on the job, file a charge with the Equal Employment Opportunity Commission (EEOC) or any state or city agency, or participate––including being a witness––in an employment discrimination proceeding, such as an investigation or lawsuit.

How to File a Claim For Race Discrimination

If your claim falls under multiple racial discrimination laws, the three agencies have what is called a “work-sharing agreement,” which means they cooperate with each other to process your claims. There is no need to file a claim with each agency. You simply need to indicate that you want your claim “cross-filed” with the other agencies. 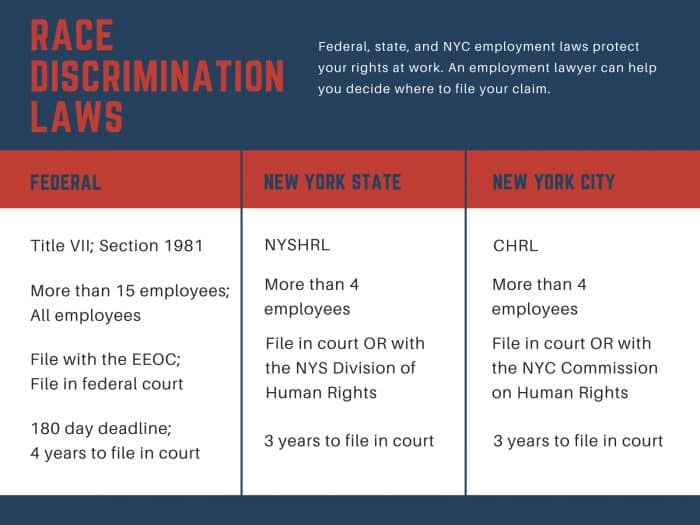 Victims of racial discrimination can also receive emotional distress damages in a lawsuit.