Protect Your Rights With A Restaurant Lawyer

Learn about your rights under federal, New York state, and New York City wage theft laws. If you’ve lost money because of wage theft, reach out to Charles Joseph, an experienced NYC restaurant lawyer, for a free consultation today. 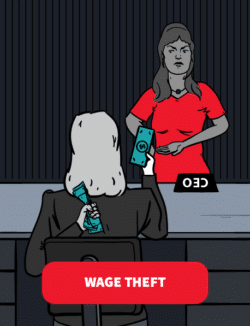 What is Wage Theft?

Wage theft is when employers underpay their employees. For restaurant workers, this can mean making less than minimum wage, not receiving overtime pay, or underpayment of tips.

Wage theft costs workers an estimated $50 billion a year according to the Economic Policy Institute.

If an employer pays their employee less than the minimum wage, that employee can sue for back pay and penalties.

If you don’t receive enough tips during your shift to bring your hourly wages up to the minimum, your employer has to pay the difference.

Employers cannot pay employees solely with tips. If your employer does not guarantee that you make the minimum wage, including tips, this may qualify as wage theft.

Restaurant workers who receive tips can read more about New York tipped employee laws or contact an employment lawyer for a free consultation.

Many restaurant workers receive gratuities, or tips, as part of their compensation. Employers who do not follow tip pool laws are guilty of wage theft.

The tip pool can legally only include certain employees. The pool is then divided between qualifying employees (“front of the house”), including wait staff, food runners, bussers, bartenders, and hosts.

Certain restaurant employees cannot be part of the tip pool (“back of the house”). This includes the restaurant owner and any managers. Tip pools usually also exclude back-of-the-house employees like dishwashers, chefs, and other kitchen staff, who typically don’t receive tips.

Overtime laws protect employees. Under federal laws, employers must pay time and a half for all hours worked over 40 hours in a workweek.

Under overtime laws, restaurant workers must receive one and a half times their normal wage for overtime hours. This applies to tipped employees as well.

For tipped employees, overtime must be based on the full minimum wage, not the lower tip credit hourly rate.

Employers who do not pay overtime wages, misclassify employees as overtime exempt, or pay a flat rate or shift pay for all hours worked can violate wage theft laws. Employers who violate overtime laws may have to pay back wages, liquidated damages, and penalties. For more, read our page on New York overtime laws.

Restaurants and event venues often include a “mandatory service charge” on bills. The service charge may be for large groups, private parties, or catered events.

Your employer can legally deduct income tax or payroll taxes from your paycheck. However, they cannot automatically deduct wages for spoilage or breakage, cash shortages, or a customer’s failure to pay their bill.

New York labor laws also protect employees when a customer walks out on a bill. Employers cannot deduct the cost of a customer’s bill from the server’s paycheck.

In addition to these improper deductions, employers cannot charge fines for lateness or quitting without giving notice.

Taking illegal deductions from a restaurant worker’s paycheck may also violate minimum wage protections. If the deduction brings your wages below New York’s minimum wage, you may have an additional claim.

For example, if you arrive at work at 6:00 a.m. to open the restaurant at 6:30 a.m., your employer must pay you for the thirty minutes worked before opening. Similarly, if you close down the restaurant, you must be paid for all hours worked, even after you sign out.

Under New York laws, employers must give their employees unpaid meal breaks. However, automatically deducting pay for these breaks may violate the law.

However, employers must pay for the meal break if the employee performs any work tasks during the break time. This can include tasks in the restaurant’s back end or back office, or answering the phone. If restaurant workers perform any work during the break, they must receive their regular wages for that time.

How To File A Wage Theft Lawsuit

What can restaurant workers do about wage theft? They can file a wage theft lawsuit to recover back pay and penalties.

Wage theft costs restaurant workers millions of dollars a year. It also violates the law. If you’ve lost wages at work because of unfair tipping practices or other forms of wage theft, a restaurant lawyer can help.

Charles Joseph has over twenty years of experience as a restaurant lawyer in NYC. Reach out for a free, confidential consultation today.