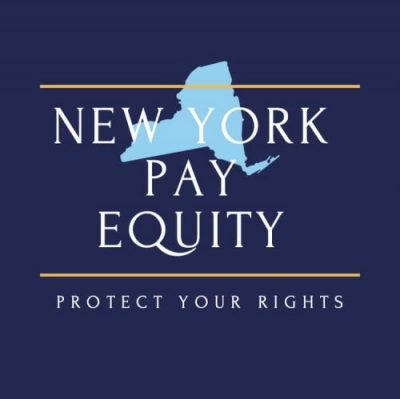 Equal work for equal pay. That’s the law in most states. But in New York, the pay equity laws go even further. Employers must pay the same wages for “substantially similar work,” even if the two employees have different job titles.

The New York Pay Equity Law, which went into effect in 2019, provides a powerful weapon to combat the gender pay gap and the racial wage gap. It also provides quadruple damages for victims of discriminatory pay.

Before 2019, New York law required equal pay for equal work. But in Sept. 2019, Gov. Cuomo signed a new law into effect that would change that language. The New York Pay Equity Law of 2019 instead requires equal pay for “substantially similar work.”

The pay equity law requires the same pay for “substantially similar work, when viewed as a composite of skill, effort, and responsibility, and performed under similar working conditions.”

Other protected groups include members of the military and parents.

Employers cannot avoid the pay disparity law by calling one employee a “senior specialist” and another a “junior specialist” to justify paying a member of a protected class lower wages. Instead, if the jobs have largely the same responsibilities and require the same skills, employees must earn equal wages.

In New York, employers can offer different salaries to employees. However, they must base these decisions on legal causes rather than discriminatory ones.

For example, employers can pay one employee more than another because of seniority, even if their job responsibilities overlap. They can also institute a merit system to increase the salary of some employees over others. This includes systems that tie earnings to sales, production numbers, or measurable quality.

Finally, factors like education, prior work experience, and training can also justify offering different salaries. However, employers must prove that the salary difference comes from a job-related qualification. For example, employers cannot offer a former fraternity member a higher salary than his female coworkers because he was in a college fraternity.

In some cases, these legal policies might negatively impact members of a protected class. Employers must adopt an alternative method of assessing pay that does not harm protected employees if available.

New York law offers one of the longest statutes of limitation for equal pay claims in the country. In New York, employees can file a wage discrimination claim for up to six years.

New York employees can file a lawsuit if their employer paid them lower wages for the same work as other employees. But how can you file a pay disparity lawsuit? And how do you prove discriminatory pay?

Working Now and Then was founded by Charles Joseph, who brings over two decades of experience in employment law. He is the founding partner of Joseph and Kirschenbaum, a firm that has recovered over $140 million for clients.

Contact Working Now and Then for a free consultation to find out if you have a claim.