The History of Sexual Orientation Discrimination

A U.S. Senate report in 1950 found that employing “homosexuals and other sex perverts” in the federal workforce threatened national security.

Workplace protections for LGBTQ employees were nonexistent before the 1980s. In fact, the federal government actively encouraged workplace discrimination. In 1950, the U.S. Senate investigated gay federal employees as a national security risk, and in 1953, President Eisenhower signed an executive order that banned homosexuals from the federal workforce. His order declared that “sexual perversion” made gay employees a security risk.

Until the 1970s, the federal government had not even consider legal protections for sexual orientation. In 1975, a group of Representatives from New York, California, and Pennsylvania introduced the first federal bill to protect gay rights. The bill banned discrimination in employment, education, and public accommodations on the basis of “affectional or sexual preference.” Congress never brought the bill up for a vote.

Starting in the 1980s, a small number of states stepped in where the federal government had not, passing laws banning discrimination on the basis of sexual orientation. 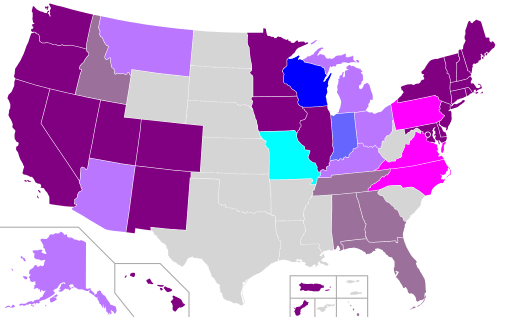 As of 2018, only 22 states protect LGBTQ employees from workplace discrimination.

Under these protections, if a New Yorker is fired for being gay, he or she can file a claim for discrimination.

Is Sexual Orientation Protected At the Federal Level?

At the federal level, can employers discriminate against employees because of sexual orientation? The answer is, unfortunately, complicated. In the executive branch alone, the past five years witnessed major changes and reversals for sexual orientation protections.

In 2014, under President Obama, the Department of Justice formally announced that the executive branch

would consider sexual orientation discrimination illegal under Title VII of the Civil Rights Act of 1964, which bans discrimination based on race, color, religion, sex, and national origin. The Attorney General, drawing on previous case law, argued that sexual orientation and transgender status are covered under Title VII’s sex discrimination protections. stating, “Although Congress may not have had such claims in mind when it enacted Title VII, the Supreme Court has made clear that Title VII must be interpreted according to its plain text . . .  Title VII’s prohibition of sex discrimination is a strong and vital principle that underlies the integrity of our workforce.”

In the judicial system, federal courts are split over whether discrimination laws cover sexual orientation.

In practice, that means workplace protections for LGBTQ employees vary widely depending on where they work.

So does federal law protect against sexual orientation discrimination? The question remains complicated today, and in part it depends on where you live.

The EEOC argues that multiple federal court decisions support coverage of LGBTQ discrimination under Title VII. But with circuit courts and the Trump administration disagreeing, the question may have to wait for a Supreme Court review. The recent Masterpiece Cakeshop decision may look like a license to discriminate against gay customers, but the Supreme Court’s majority decision confirms “[religious] objections do not allow business owners and other actors in the economy and in society to deny protected persons equal access to goods and services under a neutral and generally applicable accommodations law.” However, the case does not touch the question of whether Title VII includes sexual orientation discrimination protections for employees.